Back in Australia – and a week passes by….

Another week just flys by in Melbourne…

The weather is not great but still warm enough to have breakfast on the verandah. I spent the the first few days on the phone to various contacts and trying to get into the right time-zone. Somewhat frustrated by people not getting back to me. Basically I use the ‘rule of 3’ which is basically that if I don’t get a response after three tries I write it off.

I do manage to arrange meetings with Bruce Shephens who was a member of my first professional outfit – The Bluetongue Bush Band – which used to gig around Sydney in the late 1970’s with residencies at The Dispensary in Anandale, The Covent Garden Hotel at the bottom of Dixon St and, later, The Governor’s Pleasure in The Rocks. This was the band that originally got me into ‘social dance’ scene as we tapped into the bush dance revival, running a regular monthly dance at the Surrey Hills Community Centre. I also got into this as a dancer and remember going to dances at Balmain Town Hall  including one which featured The Bushwackers.

On Thursday spent all day in Ringwood where my brother lives. The weather had heated up to a nice 28 degrees and the flowers were in bloom at the war memorial. I don’t know if this random chance but the path to the memorial was flanked by blood red blooms . Appropriate I guess, but slightly macabre. It’s ANZAC Day at the end of April, but I’ll be back in England by then….

On Friday I head over to Kew to see Hugh McDonald to say ‘hi!’. I did the track

laying to about half the tracks of the WoodworX – Two Short Planx album at his studio and have kept in touch. On the way there I start to wonder whether it would be possible to record my solo album over here with Hugh producing it. As one of my favourite albums of all time is Redgum’s Midnight Sun, this idea appeals to me a lot. There would be quite a few practical difficulties with this, especially with the preproduction phase,  but with the help of Skype and so on it would work. I would mean me spending a couple of months over here next year (Oh dear, what a pity, never mind).

Melbourne is just getting into Autumn and Melbourne is far enough south to support a lot of imported deciduous trees, so it has more of a European autumn than Sydney, where I was bought up. 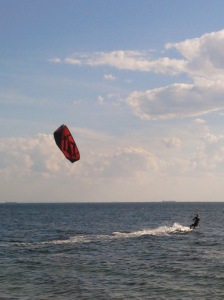 After Kew had a few hours off before my evening meeting in East Brighton so I drove down to the shore of Port Phillip bay and went for a bit of a walk. Saw some guys para surfing/boarding on the bay, it all looked pretty cool. The edge of the bay is lined with beaches but there’s no surf as it almost completely landlocked. I heard that the bay is actually in pretty good shape in terms of the ecology. There was a potential problem with nitrate run-off, but they are addressing that. More power to the Victorians, they can probably teach the north a thing or two about how to look after the environment.

I ended up up at the St Kilda marina. The pier has a nice little cafe on the end which we went to last time I was in Melbourne when were doing the Fairbridge Folk Festival a few years ago. I was looking forward to a nice cold beer there but unfortunately it was closed for a private function to I had to trek back to the beach where I managed to assuage my thirst.

The weekend started well with a Nudgel’s gig at the Penny Black playing a mix of Cajun influenced rock and blues. The Melbourne music scene at this level seems to revolve around a relatively small number of music venues like the Penny Black (a converted post office) and The Lomond. On Sunday I went to see a gig at another of these venues – the Edinburgh Castle – with Mandy Connell and her band, but unfortunately the agent double booked the venue, and she’s agreed to postpone her residency there for a few weeks. It seems that agents are pretty useless on this side of the world as well…

Later this week I head up to Canberra for the Nation Folklore Conference followed by the National Folk Festival. I have quite a long list of people to meet up with there, so I should be kept pretty busy. With any luck I should get some playing in as well…