In July the sun is hot… (is shining? No it’s not! – Flanders and Swan)

July kicked off with an appearance by the Chiltern Ceilidhs band at the Leagrave Youth Work Action Group Youth Festival to try and drum up some more local support. This was followed by a dash down to Berkshire for a MoonLighting gig for a town twinning event with a town in the Champaign region of France. This meant that many of the audience have only a passing acquaintance with the English language so the caller (Ali) has a bit of a job on her hands. However the audience still have a lot of fun which is the intent. The rest of the band was made up of myself (guitar), Sian Phillips (fiddle) and Jo May (percussion). Not much evidence of the bubbly tho’…

Next day (Sunday) I head up to Sheffield to help install Lisa in her new ‘shared’ house which will be her abode for her second year at Uni. It’s not very far away from her previous year’s halls of residence but is further up the hill. The previous occupants have left the place in a bit of a state – to be expected from male students I guess. Lisa’s room is right at the top of the house which means that it’s a bit a trek to get her stuff up to the attic. I then had to get back for my students who I teach on Monday evenings.

The next gig was another MoonLighting on Friday the 8th at a School in Wandsworth. It was meant to be out of doors but as the weather was very windy and we were worried about rain we managed to pursuade then to relocate it indoors. Unusually for us, there was no percussion and Ali played sax and accordion, with Sian on fiddle and myself on acoustic guitar. Lisa called and everything went very well indeed – she’s becoming very experienced – not surprising since she’s pretty well grown up in a social dance environment.

The following day I had my first Hoedown Band gig of the month in Rochester (Kent). This was a wedding function with the fantastic Liz Scholey calling. She is an amazingly engergetic and skill dance caller and teacher and the only person I know who can kick higher than the top of her own head. The band has been working on a new – black – playing kit for this kind of posher function gig and Sian was showing off her new fiddle design on the back of her shirt (see photo). 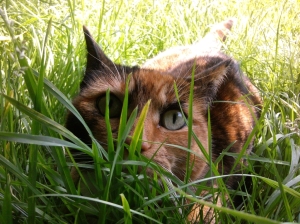 I actually managed to get some quality time in the garden with some summer sunshie. One of the great things about having a camera on a mobile phone is that you can take snap a spontaneous snap without having to lug a seperate image capture device around with you.  Here I’ve caught Dazzle in full ‘jungle mode’. As you can see the alternating heavy rain and sunshine has turned the lawn in to a lush velt – which caused the mower to fail.

The following weekend was Guilfest which we have been performing at for a number of years now. The gig is called Farmer Giles Barn Dance which takes place in one of the concert marques after the main stages shut down. This is another Liz gig who managed to introduce some Line Dance and Zumba into the mix this year. We always get a good crowd who patently enjoy themselves bopping around to out funked up celtic / folk rock sound. This year I took some video to make an EPK (Electronic Press Kit) and you can see the result below…

As you can see, we went down really well again this year and they have asked us back in 2012 – which will make it fives years in a row…

After this, my next gig with the Barn Dance Band in Whitchurch with my old mate Gary Munelly on drums. This was in a nice old barn and, despite Liz having a leg injury, everyone had a cracking time.

The month ended with the Musicians’ Union Biennial Conference which took place in Bristol this year. The conference allows the Union activists to review the actions of the Executive Committee and the secretarariat as well as put motions and generally debate the issues effecting the union, the membership and the music business as a whole. As a sitting EC member this mean that I had to get there are day early so we could see the final motions and help formulate the EC’s responses. There were also some great guest speakers – including a great speech from the labour MP John McDonald who is something of a firebrand.

There are also lots of opportunities to socialise through out the two days – to make new friends and renew acquantainces. We even had a a chance to make some music at a jam session in the bar on one of the evenings with Ian Lindsey (Black Diamond Band) and rock fiddler – Pete Hartly. I was also persuaded by jazz tromponist and fellow EC member Gail Brand to give Twitter another go – so anyone who wants to follow – I tweet under the ID of Brian8ch.

After getting back from Bristol I had two more gigs – another open air gig barn dance / ceilidh with MoonLighting with Mark Knight (madfiddler) and Gary Munelly on a Korg Wavedrum. I was very impressed with this device which is a hybrid acoustic / V-drum with the signal source being the vibrating drum head rather than an electronic simulation. This semms to give a lot more expression and dynamic range than a purely electronic device like the Roland HPD. I remember when the first model came out in the mid 1990s – a very cool instrument but priced outside the budget of most working musicians. The new drum doesn’t look quite so cool but is much more affordable – worth checking out if you need a very portable and flexible percussion instrument.

Sunday saw a covers gig with my band Stencil with our first gig at a local hotel called the Highwayman on the southern edge of Dunstable. I’ll have more to say about this venue next month.

Next blog will be about August/September…